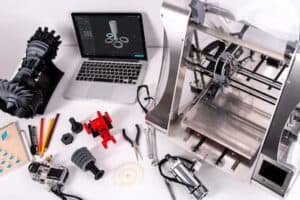 So, you get 3D Printer and now you want to design or editing 3D models, Here's the top list of free CAD 3D print design tools for beginners and advanced users.

3D Printing, technically known as additive manufacturing has been gaining interests of many in the last decade. The multifarious uses of 3D printing have led it to be a must-have tool for every architecture and engineering firm. 3D printing enables you to create and manufacture real objects from a digital file in no time.

It is not only a user-friendly process but is also an environment-friendly procedure as it requires much less material than the traditional manufacturing methods. The technical advancements in 3D printing have extended its uses in various industries like aerospace, aviation, construction, consumer products, food and medical industries. What’s the most interesting aspect of this procedure is the flexibility it offers to its users, but what are the tools to do so? Let us answer this question for you here as we tell you about free CAD 3D print tools.

3D modeling can be mainly categorized into three categories and understanding that will help users select our type of model and the tool that is the best fit for it. The major classification is such that there’s “object primitive modeling”, “parametric modeling” and “mesh modeling”. Object primitive modeling is used for creating simpler models and you start it by using pre-defined shapes, by adding and subtracting objects to and from each other you can create new objects which can then be 3D printed through 3D printers. On the other hand, in parametric modeling you initially use a 2D object and transform that into a 3D object by extruding. If you choose this sort of modeling, you can have all the steps saved to create your object, thus it is far easier to alter a model in the parametric model than in object primitive modeling. Mesh modeling and sculpting is more of an artistic approach to 3D modeling where you can manipulate an object like clay. You can sculpt the objects to give them defined features; this makes it a great option for animation and character creation.

Now that you know about the categories, let’s move on to the tools that you can use for 3D printing which are CAD programs and free of cost too!

Starting with “TINKERCAD”, it is the most popular software among the beginners and it provides one with immaculate opportunities to create 3D objects using primitive object modeling. This software is free, cloud-based and easy to use. It has a drag and drops features which make it easy to select various objects to create one. Other tools allow you to subtract one shape from the other to create holes. You can then resize and re-centre the object; however, it is difficult to make major modifications in TinkerCADas it works on the building block method. It also provides you with basic mesh editing options but it does not support image manipulation like taking a JPEG format picture as an example. You can import the STL file and use it to manipulate it to create your object. The downside of TinkerCAD is that you need to have a strong internet connection otherwise working on it and saving the details becomes an irritating process. TinkerCAD also had a number of educational resources and tutorials that you can use to learn the tools. It can be connected directly to the 3D printer to print your choice of models.

“MATTERCONTROL” is one of its kinds amongst software. This highly intuitive and advanced tool helps you bring your imaginations to life. It can easily compete with other paid software based on its functionality, but we would say it is even better because it is free! In addition to that, it is open-source. You can design, create, analyze and print your models in this parametric software which works on the principles of hybrid modelling. You start with a pseudo-parametric design and work it up to 3D model. What distinguishes this software is its capability to import JPEG format files and turn them directly into a 3D object. It is swift, easy and magical!MatterControl has amazing support for its users in terms of the tutorials that are present for its tool usages according to the level of the user’s expertise. You can download it without paying a single penny on your Mac, Windows and Linux!

The list of free CAD 3D print tools also includes “FREECAD” which as the name suggest, is free. It is a highly flexible, open-source and parametric software. It supports meshes and right-hand coordinate system. In order to design a 3D model on FreeCAD, you start out by drawing a sketch which is two-dimensional. Then you pad and extrude the sketch to transform it into a 3D object. You can combine it with other object and sketches to create new ones on FreeCAD.

“MESHMIXER” is an artistic tool for 3D printing and designing. It is used widely in the health industry as well as for product designing and engineering devices. Meshmixer offers a great variety of tools like drag and drop mesh mixing, 3D sculpting and surface stamping, re-meshing and mesh simplification, and other printing tools like automatic print bed orientation optimization, layout and packing. This software is free for Mac and Windows users and it has got a lot to offer to you.

Moreover, “Blender 2.8” is also the software that has won the hearts of many animators and designers. It is free, intuitive, and open source. Using this software you can make animated movies as it enables you to do rigging, texturing, rendering, and video editing. It covers your entire work-flow from the concept to the final output, thus it is easier to track your progress on Blender. Fortunately, it also comes with a built-in game engine which has given it much popularity among the game developers’ community.  It is kept up to date and is a highly efficient software.

Other software that you might look into includes Fusion360, Leopoly, Vectary, CATIA, AUTOCAD, OnShape, Sketchup, OpenSCAD, and Sculptris. You will find details of these tools in our other articles, so don’t forget to check them out too!

Keep designing and keep printing to bring your projects to life!